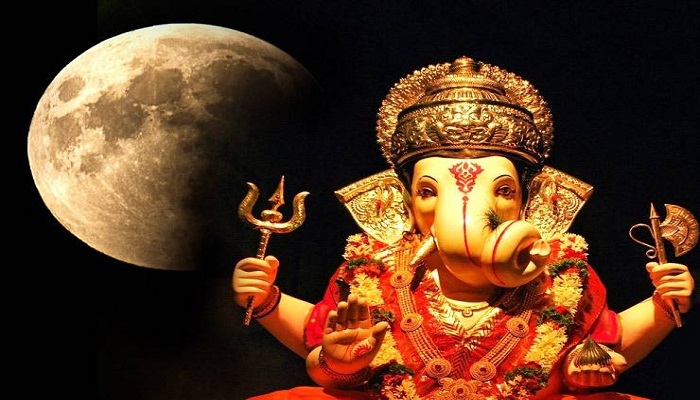 Why is Ganesh Chaturthi accused of lying by seeing the moon?

Chaturthi of Shukla Paksha of Bhadrapada month is called Vinayaka Chaturthi. The birth anniversary of Lord Ganesha is celebrated on this day. It is practiced by tradition that one should not see the moon or moon on this day. In today’s article, we will tell you why one should not see the moon on Ganesh Chaturthi. Seeing the moon of Chaturthi can lead to false accusations on the person. In particular, there may be charges of theft. The person may be implicated in the charge. Two stories are prevalent in this regard.

According to the legend, once the competition of the earth revolved by the gods, all the deities including Karthikeya went out on the orbit but because of Ganesha’s first circumambulation of the earth as a parent, he prevailed. All the gods praised and prayed to him, but Chandradeva did not, because he was proud of his power and beauty. Ganeshji understood that ego has come in it, then in anger, Ganesha cursed him that from today you will be black.

Hearing this, Moon realized his mistake. When he celebrated Ganesha by praising him, he said that by the light of the sun you will gradually regain your form, but today (Bhadrapada Shukla Chaturthi) this day will always be remembered for punishing you. Anyone who visits you today will be falsely accused of theft.

Sri Krishna did Chandra Darshan: It is said that on this day Lord Shri Krishna had seen Chandra, due to which King Satrajit had accused him of stealing his communal gem. Then to get rid of this charge, Naradji told Shri Krishna to worship Lord Ganesha and then he got rid of that charge. Due to this allegation, Shri Krishna had to find his gem and give it to him.

If you have seen Chandra, what to do?

If you have seen Chandra on this day by mistake, then you should read this mantra of Ganesha to avoid the charge. Even after accusations have been made, read this mantra, which does not blame Chandra Darshan. If you want to know more then consult our famous astrologer.

After reciting the above mantra, duly worship and pray to Lord Ganesha. And if possible, read Shrikrishna’s Syamantak Mani Katha.